What is the purpose of the Fn key?

What is the purpose of the Fn key on my keyboard?

In order to assign more functions to the limited number of keys, modern keyboards have the (mostly blue) Fn key, which is located next to the Ctrl key. "Fn" stands for "function". 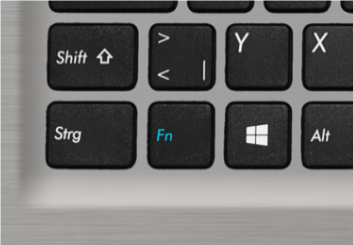 In addition, some keys have two commands printed on them, one of which is printed in the same color as the Fn key.

By simultaneously pressing the Fn key and one of the associated keys with additional function, the commands printed on the keys can be executed.

The information in this article refers to:

Article in other languages:

Labels (5)
Labels:
Contributors
0 Kudos
Was this article helpful? Yes No
Share
MEDION Community
Here users can share their experiences and knowledge among themselves.