I have the problem that the Notebook does not boot into Windows 10 64bit anymore.

A week ago it started to crash to BSODs (UNEXPECTED KERNEL MODE TRAP and KERNEL_MODE_HEAP_CORRUPTION) so I figured it might be Antivirus or drivers, I updated everything and uninstalled AV.

After one of those BSODs it was stuck at the Medion-Boot Logo, some times it would go to "Automatic Repair" but it is stuck there then as well (no circle etc.)

After a few reboots I could get passed Bootscreen and the BSODs and my Notebook was turned on for a good hour playing games.

Then when I turned it off and on again it wouldn´t start anymore.

I am stuck in the Medion Boot Screen.

I can go into BIOS,

I bought new RAM and a new SSD where I installed Windows on it to see if it is those Problems.

Sadly not, I am still stuck in the Boot Logo. Sometimes I manage to get to the "Automatic Repair-Screen" But it is still stuck then.

I tried to just boot from the Windows Installer USB and an Ubuntu USB but after choosing those USB-Drives it just restarts itself.

Only the FreeDos-USB does work with it.

Now I want to flash the BIOS Update via FreeDOS.

I downloaded the notebooks BIOS from Medions support site for the X7847 and unzipped it.

My Question is now: What .bat should I start in FreeDOS ?

These are the files in the extracted folder: 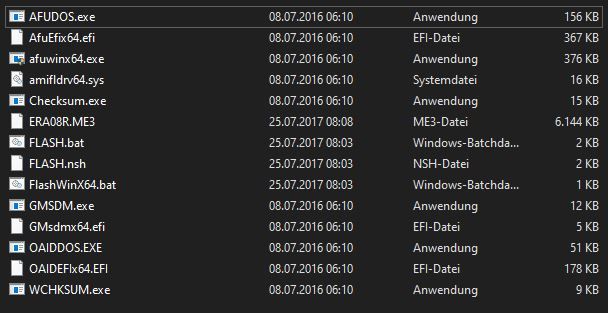 Thank you very much in advance!

Me too
0 Kudos
Reply
5 REPLIES 5
Highlighted

Before I investigate further , could you tell me the MSN number (8 digits) of your laptop and the url of the BIOS you have downloaded so I can make sure we have the right one.
What version of BIOS do you currently have installed?

thank you for your reply.

I downloaded the BIOS from here: https://www.medion.com/de/service/product-detail/30021456?fromTopicsPage=true / The Directlink is that: http://www1.medion.de/downloads/download.pl?lang=de&filename=biox7847_w10.exe&id=17387&type=treiber

I sadly do have now a bit more problems, I cannot really get into BIOS with F2 anymore and also not into the Bootmenu in F10.

Earlier I still could get into the FreeDOS stick, as soon as I accepted the Keyboard Layout, the Notebook turned itself on and off again.

Sometimes it boots to the Medion Logo and freezes there, sometimes the loop continues, and other times it does it once and stays turned off.

So right now I do have the issue that I can´t even get into the BootMenu to choose the FreeDOS stick.

I tried without any installed HDD or SSD as well, with a Stick connected and without.

Right now it is again in UEFI Mode with Secure Boot disabled.

I can´t look up the version as of now, since I cannot get into the BIOS, I will try again later and tell you what I learned 🙂

Thank you again for answering and your patience 😃

First of all , thank you for taking the time to collect the requested information.
Once you have a BIOS version , I will try to figure out how best to help.
There is a possibility that a hardware fault of some sort is causing the issue. we can of course take care of this as part of our out of warranty support and give you a cost estimate. So bear that possibility in mind although of course if we can solve this by software means it would be best.
I'll await your reply.
Some of our forum members may come with suggestions in the meantime.

Hello and thank you for your reply.

Sadly I couldn´t get into BIOS anymore so far. I will try later again.

I started a thread in the german forum yesterday, were I got a few answers so far.

thank you for pointing out the thread , I have translated and read it, some interesting troubleshooting angles explained there, I strongly suggest you carry on your conversation there.
For what its worth I still suspect a hardware fault somewhere, hopefully its just the keyboard that is causing the misery .
When you do find a solution be sure to let us know , it would be much appreciated. Good luck.

0 Kudos
Reply
MEDION Community
Here users can share their experiences and knowledge among themselves.