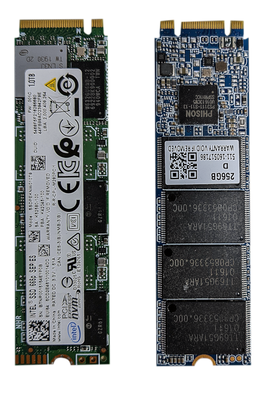 M.2, formerly known as the Next Generation Form Factor (NGFF), is a specification from 2013 for internally mounted computer expansion cards and associated connectors.
M.2's more flexible physical specification allows different module widths and lengths, and, paired with the availability of more advanced interfacing features, makes the M.2 more suitable than mSATA for solid-state storage applications in general and particularly for the use in small devices such as ultrabooks or tablets.

Form factors
The M.2 standard has been designed as a revision and improvement to the mSATA standard, with the possibility of larger printed circuit boards (PCBs) as one of its primary incentives. While the mSATA took advantage of the existing PCI Express Mini Card (Mini PCIe) form factor and connector, M.2 has been designed from the ground up to maximize usage of the PCB space while minimizing the module footprint. As the result of the M.2 standard allowing longer modules and double-sided component population, M.2 SSD devices can provide larger storage capacities and can also double the storage capacity within the footprints of mSATA devices.

Keying
M.2 modules are rectangular, with an edge connector on one side (75 positions with up to 67 pins, 0.5 mm pitch, pins overlap on different sides of the PCB), and a semicircular mounting hole at the center of the opposite edge. Each pin on the connector is rated for up to 50 V and 0.5 A, while the connector itself is specified to endure up to 60 mating cycles. The M.2 standard allows module widths of 12, 16, 22 and 30 mm, and lengths of 16, 26, 30, 38, 42, 60, 80 and 110 mm. Initial line-up of the commercially available M.2 expansion cards is 22 mm wide, with varying lengths of 30, 42, 60, 80 and 110 mm. M.2 module codes contain both the width and length of a particular module; for example, 2242 as a module code means that the module is 22 mm wide and 42 mm long, while 2280 denotes a module 22 mm wide and 80 mm long.
An M.2 module is installed into a mating connector provided by the host's circuit board, and a single mounting screw secures the module into place. Components may be mounted on either side of the module, with the actual module type limiting how thick the components can be; the maximum allowable thickness of components is 1.5 mm per side. Different host-side connectors are used for single- and double-sided M.2 modules, providing different amounts of space between the M.2 expansion card and the host's PCB. Circuit boards on the hosts are usually designed to accept multiple lengths of M.2 modules, which means that the sockets capable of accepting longer M.2 modules usually also accept shorter ones by providing different positions for the mounting screw.

Note:
M.2 Connectors have only one key even though module cards could have two keys

Article in other languages:

Labels (1)
Labels:
Contributors
1 Kudo
Was this article helpful? Yes No
Share
MEDION Community
Here users can share their experiences and knowledge among themselves.